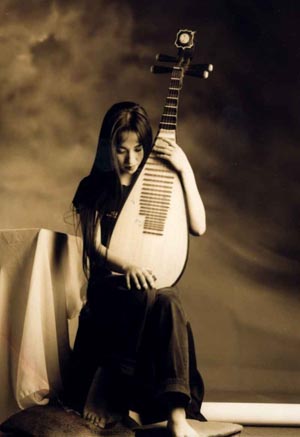 She was born in the city of Hangzhou, in the south-east of China. At the age of eight, she began to study the violin, the erhu, and later concentrated on the pipa. By the age of thirteen, she was awarded the first prize at the entrance examination for the Central Conservatory of music in Beijing. Considered as a prodigy, a documentary movie was published on her exceptional musical abilities, (Chun Lei, “Little Genius”), as well as various other TV and press reports. Lingling YU obtained the bachelor’s degree in Arts at the China Conservatory of music in Beijing at the age of twenty-two.

At same year, she was appointed as lecturer at Tsinghua University in Beijing.

At twenty-five years old, she won the national competition of Chinese traditional music in Beijing. Together with her master Dehai LIU (the most important pipa player, professor and composer), she traveled throughout China with her favorite instrument, teaching and giving public performances. Dehai LIU exerted a great influence on Lingling YU’s musical evolution.
She studied with other famous pipa professor such as Jieli LUO, Fandi WANG and Weixi SUN who gave Lingling YU the opportunity to broaden her knowledge, enrich her repertoire with a great variety of styles, and allowed her to find her own way, giving free range to her personality. Her performing style, combined with an exceptional mastery of all the techniques of the instrument, is powerful, clear, warm and creative, characterized by brightness and delicacy, an encounter between emotion and serenity, blending the two principles of the Chinese philosophy : the yin and the yang.

To explore the links between western and eastern music, she settled in Switzerland in 1998.

1998 – 1999, she studied orchestration with Jean Balissat at the University of music of Lausanne.

2000 – 2005 she studied harmony with Pierre Studer, contrepoint with Kurt Sturzenegger, orchestration with Xavier Dayer, improvisation with David Dolan and Marco Ferrari and took part to the composition course of Eric Gaudibert and Nicolas Bolens, and other classes at the University of music in Geneva.

She is member of the Association of Swiss Musicians and lives in Geneva.

2009, a big tour (in north of Africa – south and west of Asia – Suisse) of creations and concerts ( between world music and jazz music), with 13 musicians from 7 different countries. Project director, jazz pianist François Lindemann.

02.2014,  give master classes and workshops of Kunqu Opera’s music at University of music and dance of Lyon.

05.2016, gave a lecture of pipa music and a concert of pipa solo and due pipa and guitar (traditional and contemporary music) at University of music at cademy of Music in Krakow, Poland.

08 – 09.2016, work with the composers for new creations for Nieuw Ensemble & Atlas Ensemble in Amsterdame.

2016 – 2018, participate a music project (10 music professors participate) to search – compose – Performance – Register. The research will be between indian, chinese… and european music.

12.2016, have a big tour of due pipa and dizi (maestro Ming ZENG) for Kunqu Opera music in Germany.

2017, The creations for Dialog Ensemble: pipa and string quartet for the International music Festival – Euracia in October 2017 in Yekaterinburg Russia.

01.2018,  give a master conference and workshops at Zhejiang Conservatory of Music in Hangzhou.

2011, published her CD of traditional music for pipa and erhu, “Yue Luo” in Italy. Felmay

2019, will publish the CD for music of Kunqu opera for pipa and dizi (ZENG Ming), “ Meng Yuan”

Some press reviews and critiques on the music of Lingling YU